a day trip from Florence

Tuscany is probably one of the most iconic destinations in Italy. The region is really varied and offers many possibilities of interesting and engaging visits. In the North-West, in the area of Carrara, there is the mountain range of the Apuan Alps where you can find many quarries of the precious white Carrara marble. This area borders with the Garfagnana surrounded by woods and hills. Then, there are the historical towns of Pisa, Lucca, Prato and Pistoia. Florence is the biggest of the Tuscan cities and today it is the capital of the entire region. In the South you will find Arezzo, Cortona, Siena, the unique area of the Val di Chiana and the Crete Senesi. Finally, there is the seaside and the Maremma region, Elba Island and the Argentario peninsula. One holiday is not enough to see it all.

When you plan your Tuscan holiday, you have to choose where to go and what to see. However, Florence is a good base for you to stay as you can travel from here to other destinations. With this post I wanted to start a series of articles about day trips from Florence. I wanted to start with a little guide to one of my favourite Tuscan cities, a true medieval jewel – Lucca. So, what to see in Lucca in one day?

How to reach Lucca from Florence?

Let’s start with your travel. The easiest way to reach Lucca from Florence is by train. The trains depart from Santa Maria Novella train station every 30 minutes. Some of them are direct, and the travel costs 7,80 €, otherwise you need to change in Pisa and the ticket costs you 9,90 €. The traveling time may differ from 1 hour 20 minutes to 1 hour and 45 minutes.

Otherwise, if you came to Italy by car or you decided to rent your car here, you can go to Lucca by car using the motorway Florence-Pisa. You can park your car at one of many parking lots around the city walls. Remember not to enter the Limited Traffic Area located within the circle of the wall. Here you will find the list of free parking lots around the centre. They are marked with white stripes on the ground (the blue stripes indicate paid parking lots and the yellow ones are for the residents and people with disabilities). Otherwise you can use one of private garages and parking lots. The cheapest one is the Parking Mazzini in the North of the city.

Download my free guide to Florence “Art and the City. Two Squares in Five Masterpieces”!

The walls of Lucca

When you arrive to Lucca, the first thing that captures your curiosity are the city walls. Still today Lucca is a walled city and the walls are an excellent example of a modern fortification.

The construction of the modern circle of the wall begun in 1504. At the beginning of the sixteenth century, many of the Italian cities invested in new fortifications. Gun powder was recently invented, and the cities needed to adapt their protective structures to the new types of weapon. Medieval walls where tall but rather thin. Their aim was to block the enemy outside and make it impossible for him to get into the city. When the first cannons started to be used, medieval walls revealed their weakness. Hit by cannon balls, these walls were immediately destroyed.

Renaissance engineers and architects started to project modern fortifications with bastions and low but thick walls. Lucca decided to invest in such a fortification to protect its independence against the expansionist politics promoted by Florence. In fact, during the sixteenth century, Florence would conquer almost all Tuscany. The Grand Duchy of Tuscany would include Pisa, Siena, Arezzo but not Lucca. The Republic of Lucca would keep its independence until 1799 and for many centuries it would be the only part of Tuscany not governed by Florence. So, as you can see, this wall was quite useful! The wall is 4 km 223 m long and today there are six gates that lead you inside. A walk along the wall is definitely a must during your trip.

During the Middle Ages, Lucca was capital of the Longobard Duchy of Tuscia and from the ninth century many pilgrims started to pass through Lucca on their way to Rome. Lucca, just like Siena and San Gimignano, developed as one of the stops on Via Francigena, a road that connected Canterbury with Rome. During the Middle Ages the pilgrimages were a particularly important social phenomenon. There where three main pilgrimages, the one to Rome to St. Peter’s tomb, the one to Santiago de Compostella to St. Jacob’s tomb and the one to Jerusalem to Jesus’ tomb.

People went on the pilgrimages to visit these holy places, but at the same time traveling gave them the opportunity to learn new things about distant cities, different cultures, people and their ways of life. Medieval pilgrimages greatly contributed to the development of the European culture as they reinforced cultural and material exchange within the continent.

St. Martin Cathedral in Lucca was one of the most important sacred places visited by the pilgrims on their way to Rome. The church houses a precious relic, the so-called “Holy Face”, which is a wooden crucifix, differently dated between the eleventh and the thirteenth century.

According to the legend, however, the wooden crucifix containing numerous relics reached Lucca in 742. The tale recounts that the cross was sculpted by Nicodemus, Jesus’ disciple who, together with Joseph of Arimathea, deposed Christ’s body from the cross. Since the Middle Ages the Holy Face produced numerous miracles.

In 1334, for example, the relic saved a French pilgrim from the unjust death penalty. Some other time, a precious golden shoe fell from the statue strait into the hands of a pious but very poor believer. It was a gift from Christ, but the man was not trusted. He was accused of a theft and imprisoned. Very soon however, the canons of the cathedral realized that it was impossible for them to attach the shoe back at Christ’s foot and they understood that the poor man was saying them the truth. They offered him money and put the shoe beneath the crucifix as it would not fit the cross again. This is where the shoe remained until our times. Today the Holy Face is kept in a little tempietto designed for the relic by Matteo Civitali in 1484.

In the sacristy of the cathedral you can admire a beautiful funerary monument sculpted by a Sienese artist Jacopo della Quercia to commemorate Ilaria del Carretto. Died at the age of 25, Ilaria was wife of Paolo Guinigi, the Lord of Lucca. Jacopo della Quercia sculpted sleeping Ilaria on the cover of the sarcophagus. The lady wears a beautiful and elegant dress with a high, rigid collar and at her feet a little dog watches over her. The dog is a symbol of marital fidelity but it is sculpted very realistically.

Download my free guide to Florence “Art and the City. Two Squares in Five Masterpieces”!

One of the most particular places in Lucca is the Amphitheatre Square built during the Middle Ages on the ruins of the Roman amphitheatre. The square is not square at all, but it has this particular elliptic shape which follows the form of the pre-existing Roman construction. Today the square is a perfect place where to enjoy an aperitivo in one of the many bars located there.

As many of the medieval towns, Lucca preserves some of its towers which were so characteristic for medieval architecture. During the Middle Ages there were 250 towers in Lucca and today the Guinigi Tower is one of the most interesting monuments of the city.

The tower belonged to the Guinigi family who ruled Lucca during the fourteenth and the fifteenth centuries. If you look at the tower from a distance you will immediately understand why it is so special. At the top of the tower you will see the ancient trees of holm oaks, planted there by the Guinigi to symbolize the rebirth of Lucca under their rule.

Today you can climb the tower and admire a beautiful view on the city from its top. 230 steps will lead to the top!

Coming to Tuscany? Contact me! I will be happy to organize your private tours! Book now my private tour of Lucca! 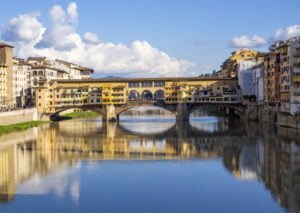 What to see in Pistoia?

Looking for a private tour?